6 Places to See the London Skyline – For Free!

I won’t be the only person to tell you that riding the London Eye is overrated. Regardless, three million people ride the London Eye every year – three million! They can’t all be wrong… But do you really want to be like three million other people? No – you’re unique, you want to do things differently and you don’t want to spend 25 quid on a glorified Ferris wheel.

Surely, no true Londoner would do that.

Living in north London has taught me that there are way better places to see the London cityscape. You don’t need to go too high, you get a number of different vantage points and it’s a lot more active than standing around for a 30-minute rotation.

Here are my (not-so-secret) secret views of London (which I updated in August 2015!): 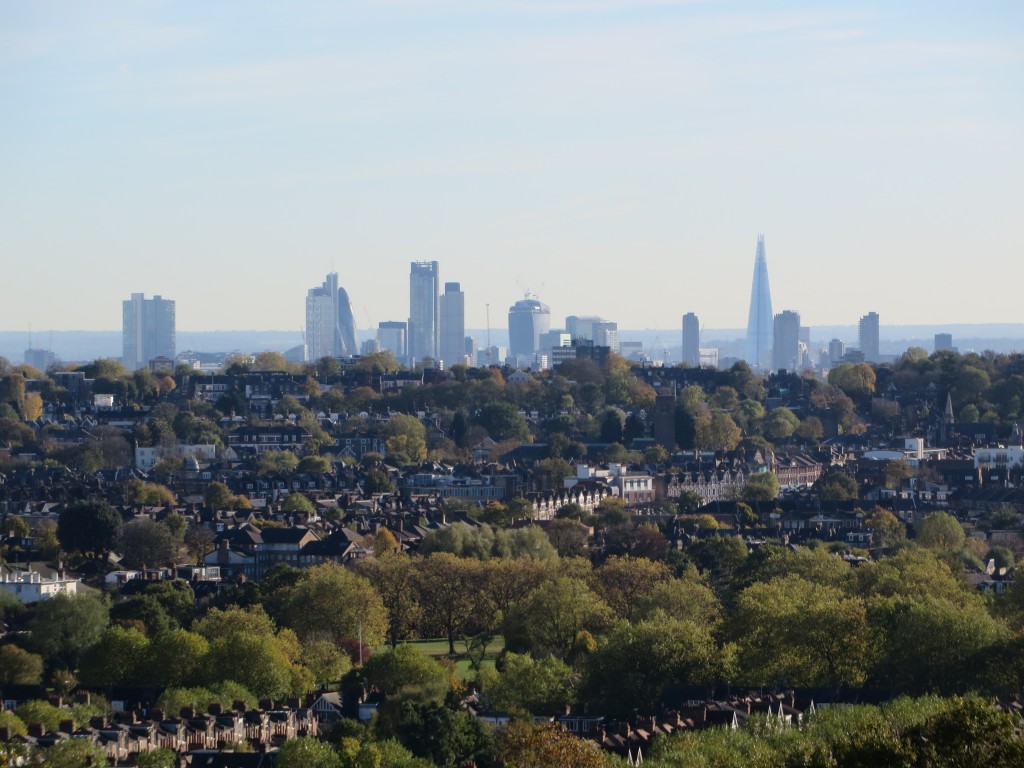 Ally Pally has become a staple in my London experience over the last few months. I’ve been here for Bonfire Night fireworks, working at the Vans Warped Tour (totally 16 again), the weekly Farmer’s market in Alexandra Park, and buying a Christmas tree. With an ice skating rink, pub, and playground, Ally Pally is a true community hub for the north Londoner.

Besides the Pitch ‘N’ Putt across the way, there are also some great views into the City of London from here. You can also see what’s called the Harringay Ladder – so named because the streets form a ladder shape from above – which is just west of Green Lanes.

The Palace is a listed building, which means it’s on a list of buildings of special historical or architectural interest. There are different levels of listed status – some can never be destroyed or have interior changes made. 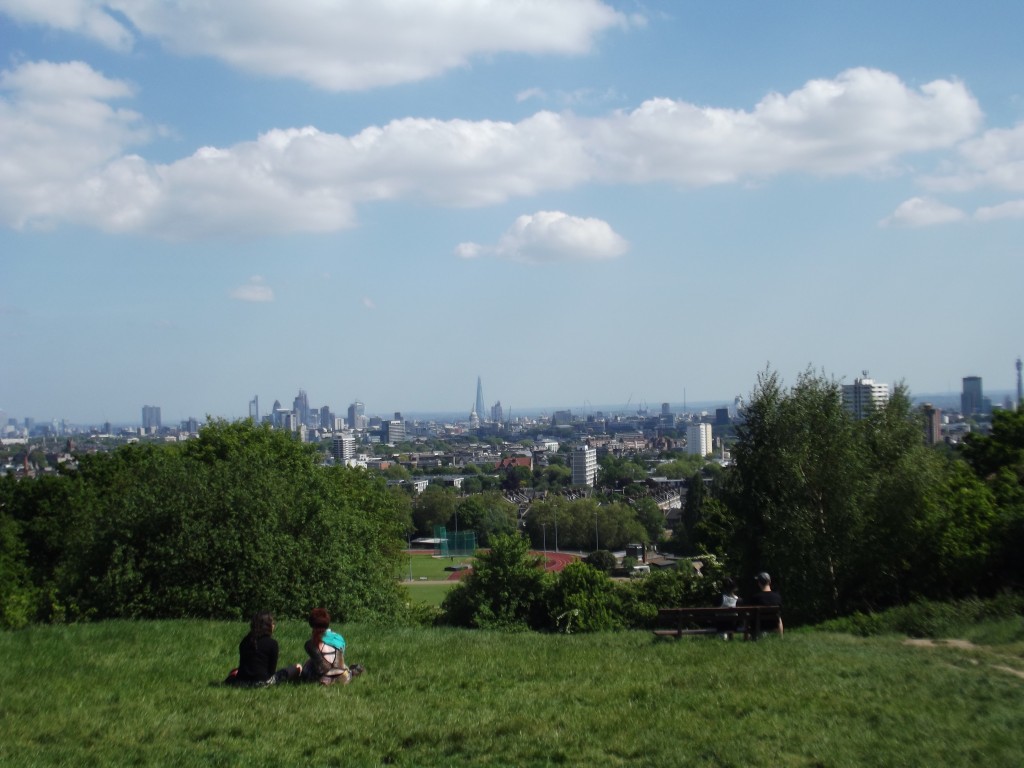 Parliament Hill is another place that I’ve visited often in north London. There is a Saturday morning farmer’s market and the newly refurbished Kenwood House. This Georgian home has just re-opened after a million-pound renovation. Inside are Rembrandt and Vermeer paintings, restored architecture with seriously elaborate embellishments, letters and a slavery and justice exhibition.

A short walk away are statues by Henry Moore, a pond, a playground, the rest of Hampstead Heath… The place is huge. There is even an extension into Golders Hill, which has animal enclosures and flower parks, and is like, a ten minute drive away. 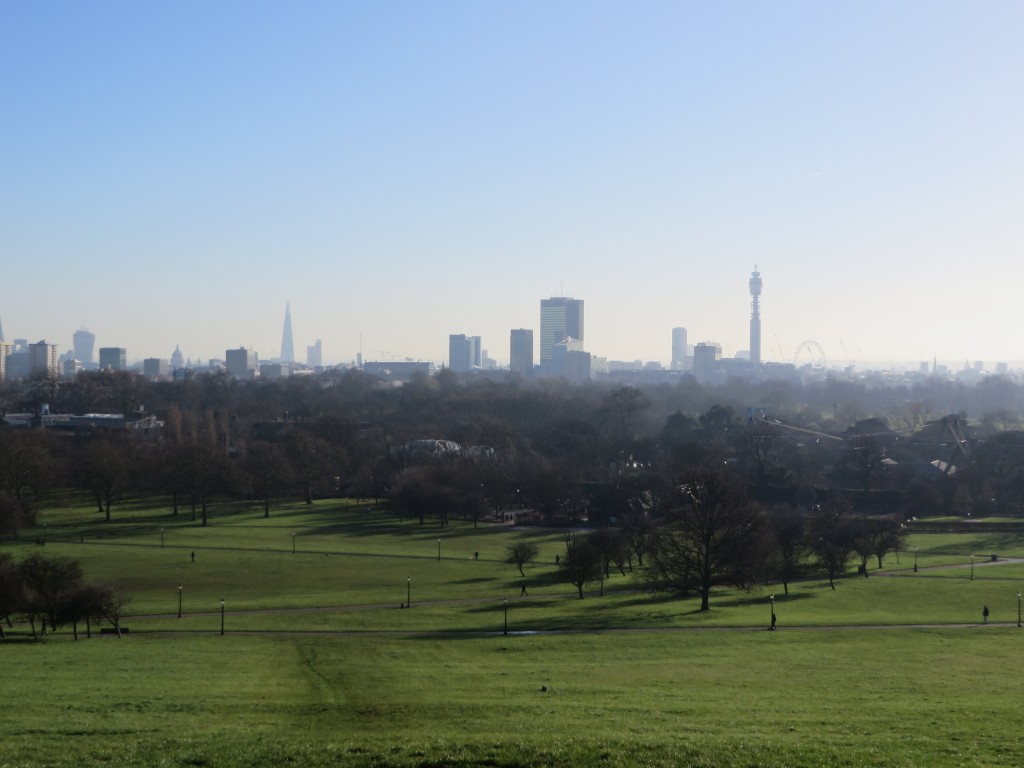 I really like this park, though my partner finds it a little bit “too American”. I don’t know what it is, but some Londoners (okay, maybe it’s just him) seem to have an aversion to extensively landscape parks. Apparently, it seems unnatural, so he prefers places like Highgate Wood with paths trodden by people rather than tractors.

I see his point, but the North American in me likes to see man’s triumph over nature – manicured lawns and perfectly placed trees. Not to sound anti-environment or anything. I love the environment. I recycle!

This hill is within walking distance of Regent’s Park, so it’s much closer to the city centre. A friend told me she thinks this is where you get the best view of London. The BT tower seems really close up, and you can see the Shard, though some monuments you can see from Parliament Hill – like the Gherkin – are obscured by buildings.

Primrose Hill is a really posh area, so while you’re looking at the skyline, keep an eye out on the joggers – you never know when a celeb might race by!

This is the only green space with a view of London I’ve found that isn’t in north London. In fact, this view from the Royal Observatory is protected by city legislation – planners are not allowed to build anything that would further obstruct monuments that can be seen from this angle.

I think this one is awesome! The panorama is such that you can see from the BT Tower to St Paul’s Cathedral to the Gherkin to a close-up view of Greenwich Palace to Canary Wharf and the O2 Stadium. Rose gardens and ancient chestnut trees are easy to explore on the pedestrian pathways.

Frank’s Café and Campari Bar in Peckham was voted one of London’s best rooftop bars by Condé Nast Traveller. Frank’s is essentially a ‘pop-up’ (what is this London obssession with the pop-up?!) on top of a ten-storey parking garage/car park that is a community project – build by local architects, sponsored by Campari and attended by Londoners.

From the roof you can see almost 360-degrees of London, from the London Eye and beyond. You can also drink any cocktail that has Campari in it, look at art, and hang out with bearded ‘artsy’ hipster types.

I was recommended this view by one of my partner’s brothers. He also informed me that they have really cool weekly concerts with good performers. I think it’s an awesome view since you can really make out all the new buildings with hilarious buildings named after appliances and household wares like the Cheese Grater and the Walkie-Talkie…

Before you go running to check it out because of this amazing description, just know that it’s only open during the summertime.

I only discovered this place in the last year on a scavenger hunt, but from here you get a fabulous view of the city – St. Paul’s Cathedral is so close it feels like you could reach out and touch it.

You take an elevator up to the top of the One New Change building (it’s a shopping centre). There are lines sometimes, especially if you go when the after work crowd is filing in for cocktails. Up there, you’ll find a nice a lovely view over the Thames and a trendy bar and restaurant called Madison.

Grab a cocktail and sip while the sunsets over the city.