Anyone that knows me also knows that I love performing arts. There is something awe-inspiring about watching truly talented people do something they’re clearly very passionate about — and that I could never do! I’ve seen more than 25 plays (like Chimerica in London), musicals, ballets, dance (including Heartbeat of Home in Dublin) and circus performances in multiple cities in North America and Europe. Thanks to Chamäleon Theater, I got to add a Cirque Nouveau shows in Berlin to the list of outstanding shows I had the honour to see.

About Cabaret in Berlin & Hackesche Höfe

When we think ‘cabaret’, Paris is probably the first place that comes to mind. But the truth is that, while cabaret originated in Paris in the late 19th century, Berlin is where it truly took off — both as entertainment and political satire known as a kabarett. Cabaret dinner shows were very popular — especially in the 1920s — which contributed to the city’s reputation for being a place of inspiration, fun, and excitement. Because of the political nature of the shows and its association with debauchery, cabarets in Germany closed down during the rise of the National Socialists in the 1930s.

The ballroom that houses the Chamäleon Theater is located in the Mitte district of Berlin and was built in 1906 in the Hackesche Höfe — a quarter that has established itself as an exciting place for art and culture. The  Hackesche Höfe heritage site is notable for its eight interconnected courtyards that separate different areas of the quarter and its Jugenstil architecture: the buildings’ art nouveau facades are made of polychrome glazed brick. 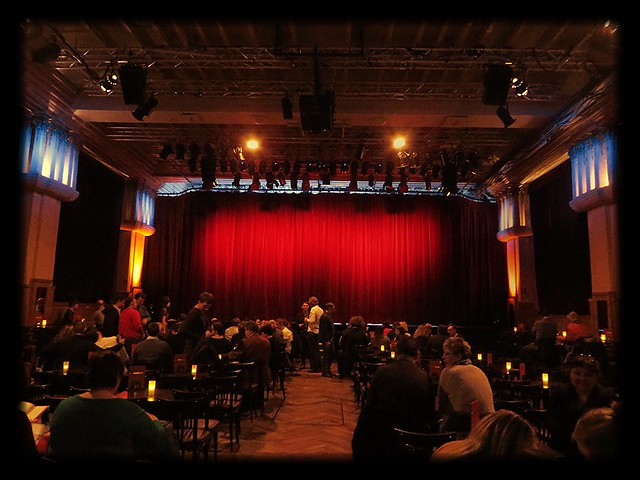 The show that’s on right now is DUMMY Lab and I had no idea what I was going to get. I’ve been to a few Cirque du Soleil shows but as I walked up the preserved early twentieth century staircase, I was sure that it wouldn’t be the same. The ballroom theatre with dark curtains, mood lighting, and bistro tables facing the small stage all combine to make for an intimate venue. 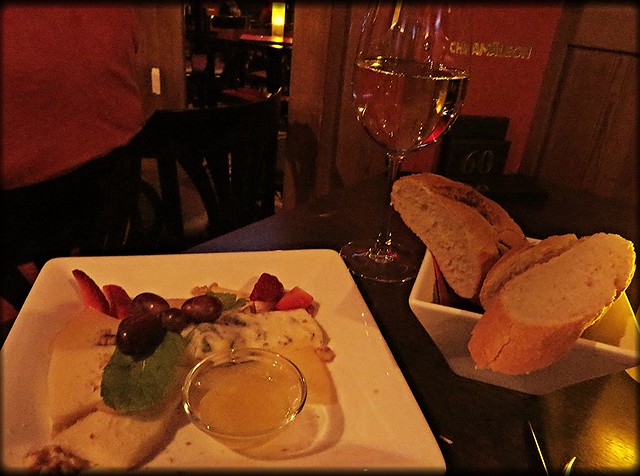 I didn’t know that I would be able to eat food so I had already eaten, but I ordered a small fruit and cheese platter (Taleggio, Roquefort, Manchego, and Provolone piquante) and a very refreshing (and very large!) glass of Grüner Veltliner. The menu is mostly Mediterranean dishes and other people were eating desserts, three course meals, and drinking fruity cocktails that came in a glass the size of my head. If only I had known…!

Chamäleon Theater changes the shows every six months or so, and the performances are typically by international companies as well as Berlin-based artists.

Usually when we think contemporary circus, we think of the Cirque du Soleil and while you certainly get some of those amazing feats of strength and balance mixed with artistry, the Chamäleon Theater show adds a little more with DUMMY Lab. There is some physical theatre, live music, and storytelling thrown into the mix, which makes their show a unique experience.

One of the advantages of the show is that there is very little talking so you don’t have to worry about not speaking German, or any other language barriers. The music is also played and sung live by Berlin music producer and singer Reecode, while Australian composer Lih-Qun Wong rocks it on the cello.

DUMMY Lab depicts the relationship between humans and puppets, asking: Can we always be sure who is the dummy? The show blends technological design, dance, and circus performances in a way that I had never seen before. They used interactive video projections that recorded the performers’ movements and replayed them as a shadow, like it was alive. It was a stunning combintation of movement and technology.

The show is avant-garde yet relaxed — I mean, two of the three male performers had man buns. Yep, man buns. But did I care? The things they could do with their bodies were incredible. The contortionist put herself in positions I just never thought the human body could achieve; another performer was actually hanging nearly perpendicular from a vertical pole, with his arm fully extended! The man in the seat in front of me was just shaking his head throughout the show as if to say “That can’t be real.” It was on. another. level.

Berlin was a trip of firsts. I did my first Hop On Hop Off Tour, I went on my first Tinder meeting (more on that later!), and I did my first dinner cabaret show, and I tell you: none of them disappointed.

What do you think, dear readers? Would you like to go see one of the contemporary circus shows in Berlin? Have you been to one of these dinner shows before? Let me know in the comments if you think this seemed like a very authentic Berlin experience!

*I received a complimentary ticket to see the show but all opinions are my own.