The Wonders of the Christmas Market

In my new job, I had to do a lot of research and writing about Christmas markets in Europe for an airline comparison website – picking the best ones, the most interesting things to do, and so on. After spending so much time trying to make what is essentially the same thing sound really interesting 13 times, I had convinced even myself that they were awesome.

What I learned in the course of writing is that Christmas markets are essentially the same all over Europe because they’re based on the German & Austrian Christkindlesmarkt. They all drink some form of mulled wine, sell food and artisanal wares, decorate the town… Except in Barcelona, that is.

In Barcelona they have a scatological little character called a caganer that the artisans sell. Essentially it is a traditionally dressed Catalan man (or Barack Obama. Or Queen Elizabeth if you have an excellent sense of humour) with his pants down, taking a shit. It represents good luck – fertilizing the earth and all that.

I also realized that I’ve never been to a Christmas market in Toronto. We ice skate and light up the town, but I’d never drank mulled wine or eaten roasted chestnuts. That being said, I only really got into markets a few years ago when the whole farm-to-table revolution happened and I jumped on the bandwagon. Or the farm tractor… Whatever.

So I went to the Christmas Market at the Southbank and I tried a lot of the things I had been writing about for days and days on end. Here’s how it went: 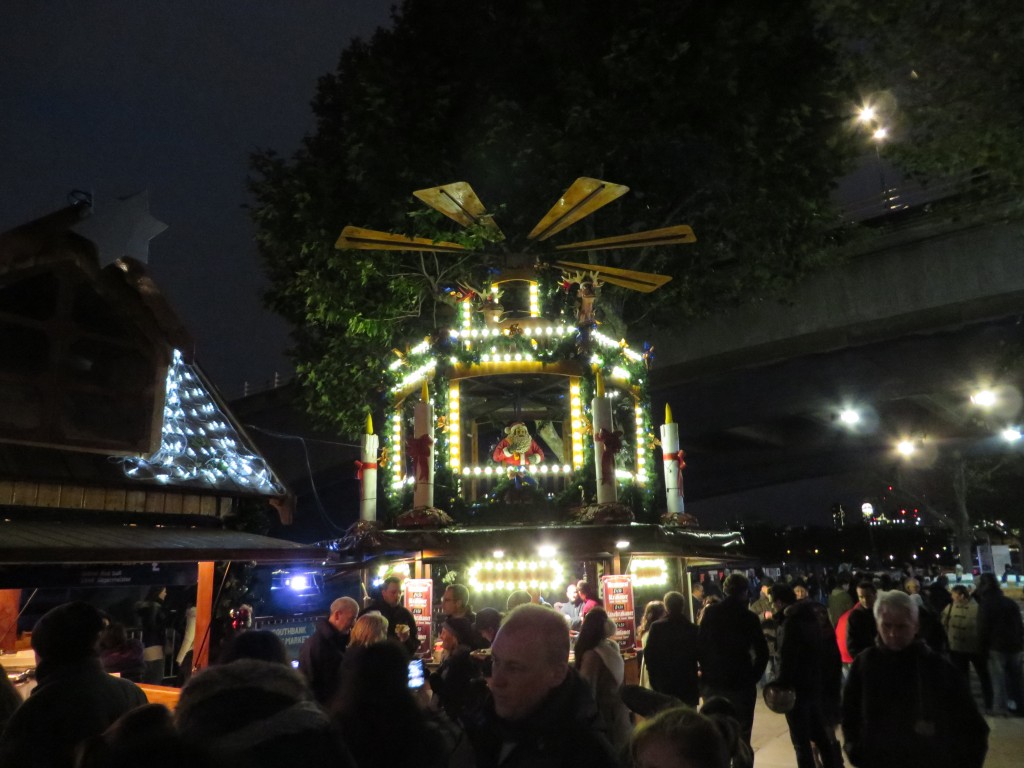 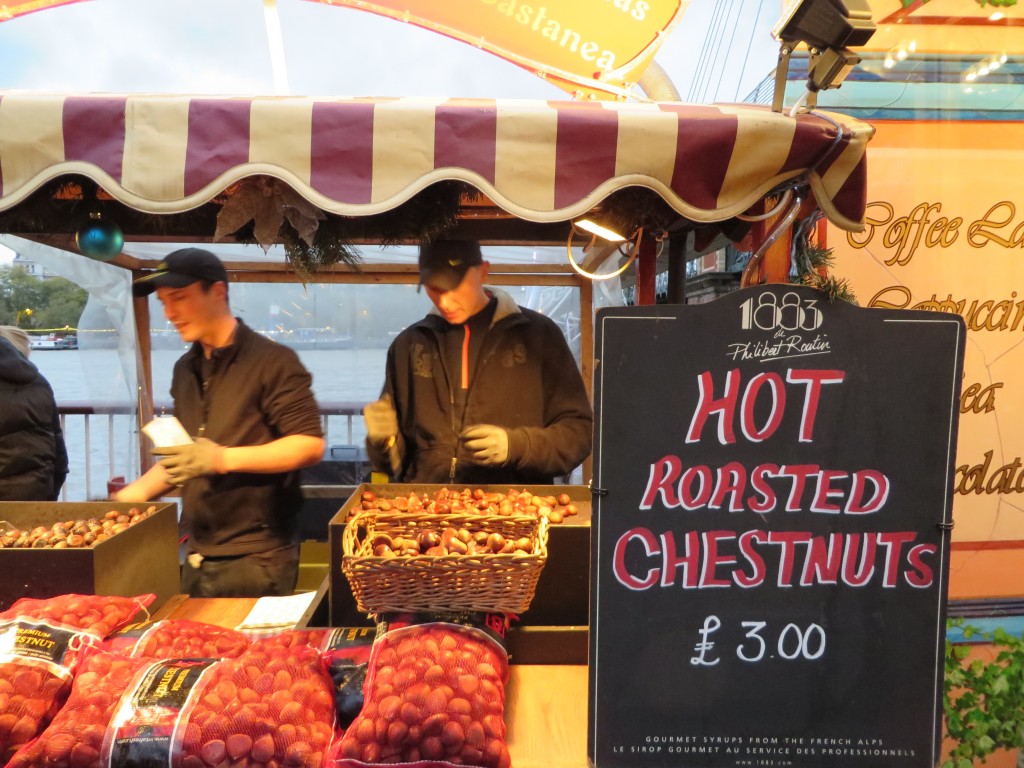 My partner and I bought some hot roasted chestnuts to share. I was really excited about these because I’d never had them before and “Chestnuts roasting on an open fire…” kept playing in my head while I was researching.

I liked them but I was still kind of disappointed.  Because he told me about glazed chestnuts, I was expecting them to be quite sweet. They actually tasted like the white sweet potatoes we used to buy in Martinique, which I found interesting. I was also annoyed because chestnuts are bloody frustrating to peel! 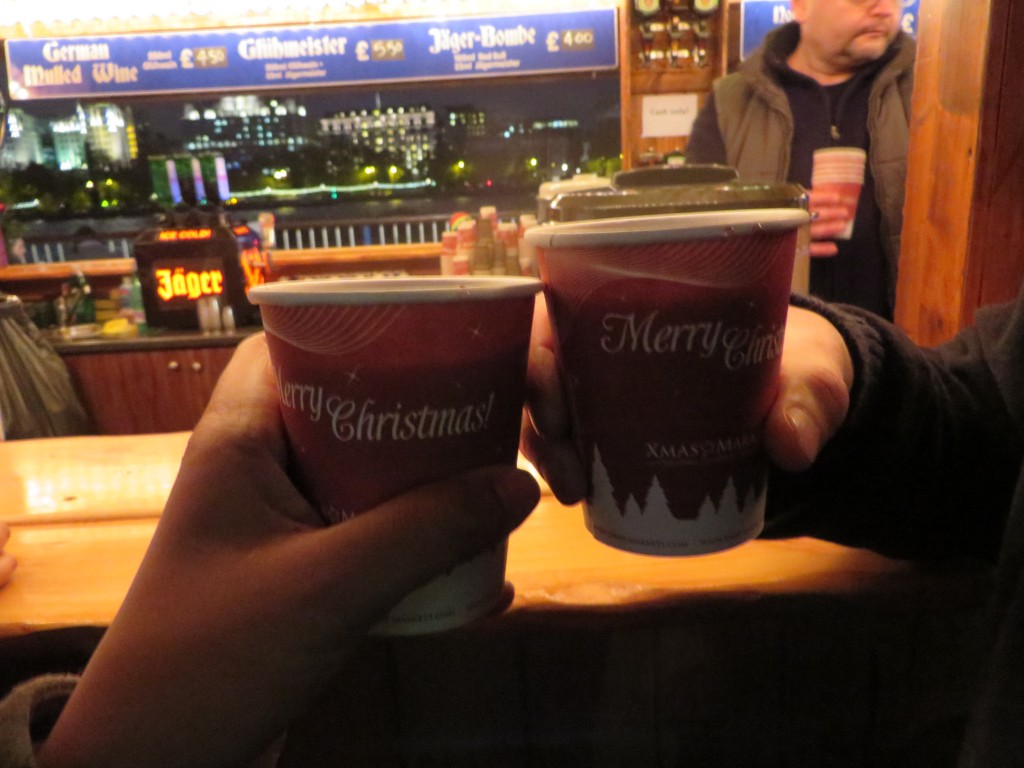 Then I had a cup of Glühwein – wine steeped in spices and dried fruit peels – which I found…disappointing. Maybe I just prefer my wine neat, but I found the tannins in the wine were at odds with the fruit and spices. Doesn’t mean I won’t try it again, because I also learned there are many different recipes. In fact, Austrians throw some rum in their weihnachtspunsch. I think they’re on to something though because, well, after about the age of 13, Christmas just isn’t as awesome unless you’re tipsy.

Obviously, I only learned that when I was 19 and of legal drinking age. Thirteen through 18 were just miserable Christmases. 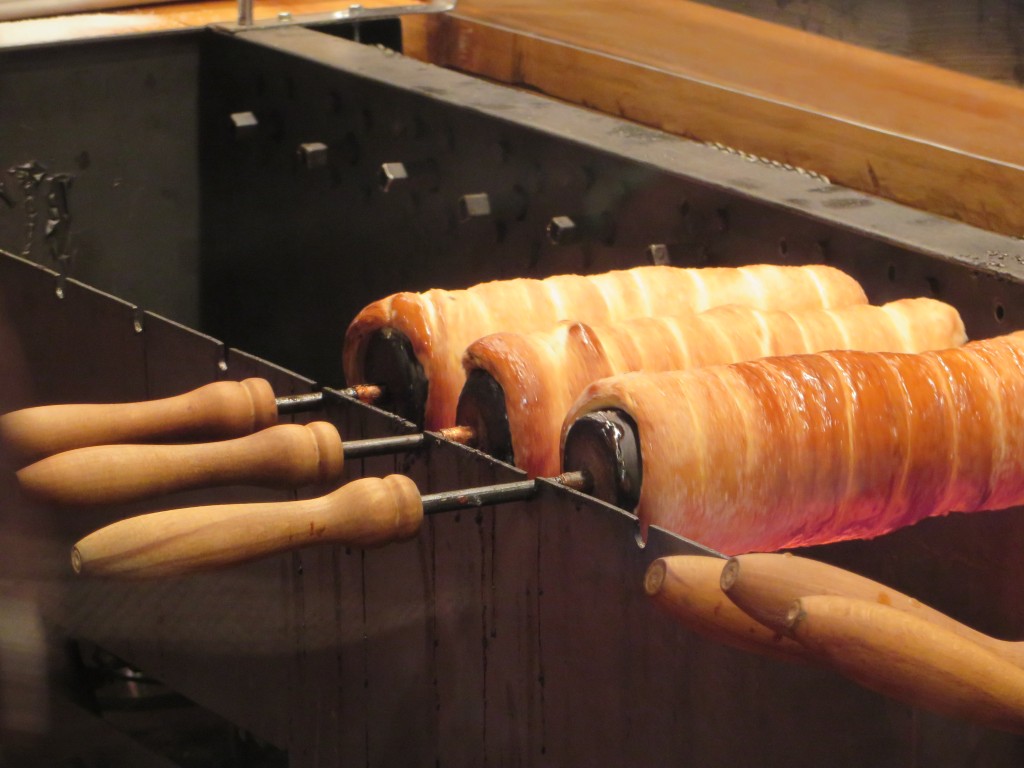 Chimney cake! Now this was a success. Chimney cake, or Kürtőskalács, is a Hungarian pastry wrapped around a cylinder and roasted over a fire. When I was researching, I thought this was pretty unique – a hollow, roasted pastry! I was glad I found one in London. After it’s roasted, they roll it in sugar and then cinnamon, sprinkles, chocolate, or almonds. I went traditional and stuck with cinnamon.

It was so good! It tasted like a cinnamon bun and was well worth the £4 we spent on it. It was fun to unravel and do silly things with like this:

And obviously, it was delicious. So the chimney cake wins!

In the UK, there’s been a bit of criticism of Christmas markets. Some love it because it removes the consumerism of taking the family Christmas shopping and instead makes the holiday more about the festive experience. Others say it’s the same shit, different day and that it’s not a British tradition.

Personally, I thought the market was fun, and a great way to get into the Christmas spirit. I definitely wouldn’t do my shopping there though. A lot of things seemed overpriced and it was very crowded. Besides, I’m mostly done my Christmas shopping!

In case you are interested in checking out some other markets in Europe, I just happened to come across this lovely graphic with information compiled by momondo.

Which ones have you been to? Which are you most interested in checking out next?

4 thoughts on “The Wonders of the Christmas Market”