Things To Do in Agadir Besides Lying on the Beach

I’m wrapping up five days spent in Agadir and it has been a wonderful way to ease into six weeks of backpacking Morocco!

Agadir is a place that suffers (and prospers?) from too many packaged tours. A lot of tourists come here, stay at resorts, and only do guided tours or what their hotels recommend. Staying with a local really helped me to find great, inexpensive places to eat and interesting things to do in Agadir.

I spent four nights in Al Wifaq with Majid, an excellent host (seriously, just check out his reviews on Airbnb!) who went out of his way to show me around and make me feel welcome. It was really helpful to have him introduce me to new things, explain the way things are done in Morocco, and communicate with people in Arabic for me. Luckily, I picked up a few terms that I’ll be able to take with me for the next 5 weeks!

Of course, lying on the beach is great and if that’s what you want on your holiday, then by all means, go for it! Personally, I like to be a little more active than that so without further ado, here are five things to do in Agadir that doesn’t include lying on the beach:

Hike Up to the Ruined Kasbah

The old ruined kasbah, also known as Agadir Oufella, sits on top of the mountain marked ‘God, King, Country’. The kasbah was built on top of the mountain in 1572, housing a few hundred people and being the location of a famous Moorish café with a panoramic view over the city. In 1960 an earthquake lasting 15 minutes destroyed the city and killed more than a third of Agadir’s inhabitants. The kasbah was completely destroyed, marking the demise of Agadir as a trading centre.

The Agadir you see today was built two kilometres away, part of which is known as New Talborjt. If you’re in good shape this is a pretty easy walk on a well-laid out path. You can get to the top in about 40 minutes. If you’re in excellent shape you can jog or do a bit of bouldering to get to the top. If you’re not sure where to go, just follow the goats that roam the area! For those not up for the hike, hire a petite taxi (the red ones) to take you there and back. Be aware that this will cost 100 dirham (~£9). You can also drive but there is a cost for parking.

Take a hat and water — there isn’t much tree cover on the way up so you’ll really feel the intensity of the sun, especially if you go at midday like we did! Make it to the top and you’re rewarded with beautiful views over the sea, the port, and the city. From here you will also see Ancienne Talborjt, the grassy area below the kasbah which houses the remains of Agadir’s medina and all those who died in the earthquake.

Eat at the Port

Every time I talk to my partner, I tell him something new that reminds me of Martinique. Most recently this was the restaurants around the port, all grilling up freshly caught fish that made me think of Chez Les Pecheurs in Le Carbet.

Majid took me to his favourite place, Resto Poisson El Fassia where we had a plate filled with fish, Moroccan salad, and baguettes for just 34 dirham (~£2.50)! There was fried calamari, whiting, sole, and shrimp piled on top of each other, served with tartar sauce. He explained that a lot of locals eat there because the price is excellent (some places next door would charge you double) and the quality is top notch.

Let’s just say that we barely spoke during this meal because of how tasty everything was — and probably because we were exhausted from the hike! Honestly, I kept thinking that the only thing that could make this meal better would be a plate of chips/fries… like how English am I?! Don’t forget to tip your servers in Morocco! 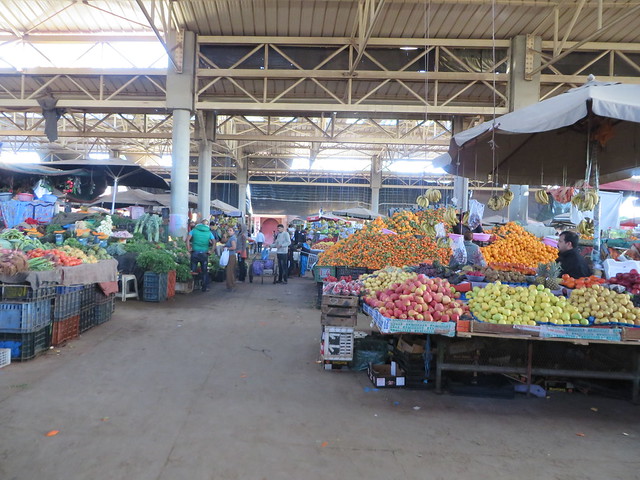 Everything I thought I knew about markets was put to shame at Souk al-Had and I don’t think any Moroccan would consider it the most exciting or beautiful in the country. The place is huge and wherever you look, there are mounds of olives, bags full of spices, and landslides of oranges. I bought four in preparation for the hike and it cost me just 3.50 dirham (or ~30p). Shoes are around for just 25 dirham (~£1.75) and every time I saw them I thought of that scene in the Sex and the City movie where Carrie gets really excited about paying $20 for shoes.

On Fridays it’s a tradition to eat couscous, so I had a plate of stewed chicken, pumpkin, carrots, and turnips served over couscous. I also had a bowl of saykouk — a bit of cooked couscous with lben (buttermilk) poured over it. It’s traditionally served after a meal of couscous and you can sprinkle salt and cumin on top. It has a sour, fermented taste like natural yogurt but is much thinner in consistency. I would probably eat it again if I could put strawberry jam on top!

Another delicious thing to eat is msemin. It’s a flaky flatbread like roti with onions, peppers, olives, and tomato wrapped inside. You’ll see women outside effortlessly shaping the raw dough and throwing them onto the grill. Ahh, so good!

This garden near New Talborjt was created in 1992 to mark the twinning of Agadir with the town of Olhão in Portugal. There is a small museum dedicated to the 1960 earthquake with historical photos of Agadir as well as a children’s library. The garden isn’t that well-maintained overall, but it is a nice place to read a book or have a picnic away from the city centre.

There is another garden nearby called Ibn Zaidoun that I went to accidentally. It isn’t as enclosed as Olhão, but a nice place to take a break from walking around the city.

Go to a local hammam spa

I went to the Al Fath community hammam in Al Wifaq for a sauna, scrub down, and good warm bath. A spa experience at a local hammam will cost you 10 dirham (less than £1), compared to 300 dirham in a hotel! Of course, the experience is different, but hammams are considered a great way to meet local women in a way you may not be able to elsewhere.

Many women go completely naked but you may want to bring bathing suit bottoms or underwear. You don’t have to go topless but women will look at you strangely — there isn’t any shame about one’s body among your own gender in Morocco and you may even see some women shaving themselves…down there! Bring along flip flops and a towel. You can buy an exfoliation glove, argan oil, shampoo, and anything else you may need.

You will get a bucket and a stool (or you can bring a bath mat to sit on) which you fill with water. Some women bring a few buckets so they have plenty of water to pour on themselves. Be careful when filling because one of the taps is boiling hot water — stupid me, I burned my hand checking which was which! That said, hammams are one of the few places in Morocco where you’re guaranteed a hot bath!

In some places you can pay a staff member and they’ll do the scrubbing for you. Your skin will never feel so clean and smooth!

I’ve had a great time in Agadir, and I learned that there’s more to the place than resorts or being a stopover to other towns. It’s a real community of people that really take care of each other.